To the extent that anyone can proudly call themselves a reality television connoisseur, I consider myself one – particularly of the Housewives franchise on Bravo.

I’ve been watching most of them since their launch and have found within these shows decades worth of entertainment and escapism.

In a world dominated by hard political news and the insanity of the past several years in particular, I and millions of other viewers have found much needed respite from the darkness and chaos in our world in these mini soap operas.

Am I watching them to feed my brain or have my political ideology challenged?

No. Of course not.

I watch them for the same reason generations of viewers have watched soap operas and sitcoms – for fun, entertainment, and something to gossip about with my friends and family about when the episodes end.

It is cotton candy pop culture escapism, and there is nothing wrong with that.

Even high-art critic Camille Paglia loves them – she compares two housewives facing off to watching a cheetah stalking a gazelle. 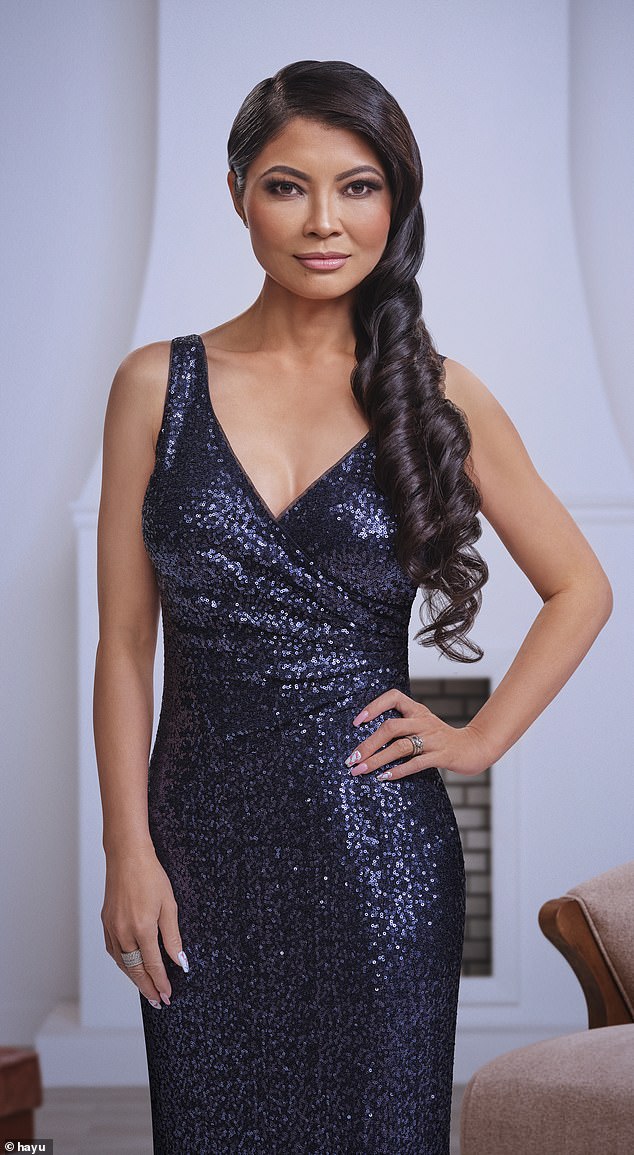 I was surprised to see that new Salt Lake City Housewife and rookie fan-favorite Jennie Nguyen (above) was fired this week after offensive Facebook posts from 2020 emerged.

In recent years, the trends in our reality show pop culture started to mimic the insane debates of the day.

Our problems are also their problems, and we watch these shows to see how our favorite housewives deal with them.

From the 2008 economic crash hitting the women of Orange County to the Covid-19 pandemic, we see these women grappling with the same challenges we have, with just a little more drama.

These women are not hired to star in these shows because they are picture-perfect, morally-sterling members of society to be admired – they are hired because they are entertaining, campy and problematic.

In recent years, as with the world at large, the shows have gotten darker.

There are two Housewives currently possibly facing possible jail time; the most notorious is Salt Lake City Housewife Jen Shah who was arrested in March 2021 for allegedly conspiring to commit wire fraud and money laundering.

She faces up to fifty years in prison. She is accused of manipulating and stealing from the vulnerable and elderly in a long-running telemarketing scheme.

There are Housewives and families who have already gone to jail like New Jersey Housewife Teresa Giudice and her husband Joe, around whom the New Jersey franchise is now completely centered.

There are too many moral, ethical and legal indiscretions to possibly enumerate in the Housewives franchise, including stealing, violence, racism, crashing an official White House dinner uninvited and nearly every moral failing one could possibly imagine.

So I was surprised to see that new Salt Lake City Housewife and rookie fan-favorite Jennie Nguyen was fired this week after offensive Facebook posts from 2020 emerged.

Several posts appeared to mock Black Lives Matter protests, support law enforcement, support the anti-vaxx movement – basically a round up of many emotionally-charged issues we all witnessed from people on the right in 2020 following the George Floyd murder and subsequent protests and violence.

Communicating by meme during times of such intensity is rarely wise but it is something the vast majority of Americans do on social media.

Was it a mistake on her part? Yes.

Do I think it was the right thing to do? No.

I do not condone what she posted.

However, I do not think it warranted her firing. 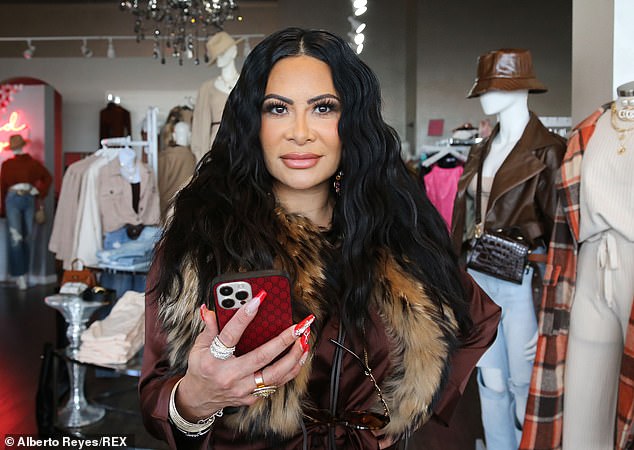 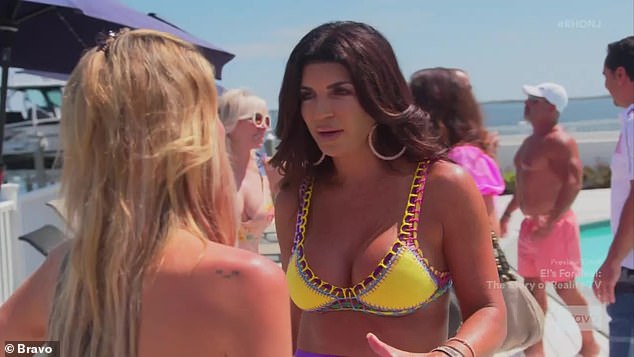 There are Housewives and families who have already gone to jail like New Jersey Housewife Teresa Giudice (above, middle) and her husband Joe, around whom the New Jersey franchise is now completely centered.

Jennie for her part has bizarrely blamed this on her social media team, which I find unbelievable since she was not a famous reality star in 2020 and it’s hard to believe that she had a social media team back then.

But at the same time, she has not backed down from her politics.

She released a statement saying: ‘I want you to understand that my political stance, I still support that. I am very proud to be a Republican. I am proud to be able to say I have the freedom of speech to choose and to have an opinion. I respect your opinion, I respect your political stance. We are different. But we need to respect each other and we need to understand that we live in this country, where we have the freedom to speak our mind, as well as we have freedom to choose. ‘

Jennie Nguyen is a Vietnamese immigrant who came to this country as a refugee on a boat.

Her story is a far cry from the famous last-name socialites, models, and actresses who litter the Housewives franchises.

She is also only the third Asian American woman to be featured on the Housewives and the only Vietnamese woman.

I admit she was my favorite this season on an already compelling Salt Lake City second year.

Aside from being entertaining and more than capable of holding her own on the show, her immigrant success story and adorable family story line (her youngest daughter brought a lot of humor and adorable antics), she and her husband are also extremely proud of their life and in their normalcy by Housewives’ standards have been fun to watch.

The summer of 2020 is one I will never forget and was an incredibly painful and emotionally charged time for every single American. Our country was and remains split.

Jennie represents the way many Americans felt during that time but who, if they want a future in entertainment, cannot voice publicly.

The question I have for NBC Universal and Bravo is: Is it worth throwing the baby out with the bathwater? 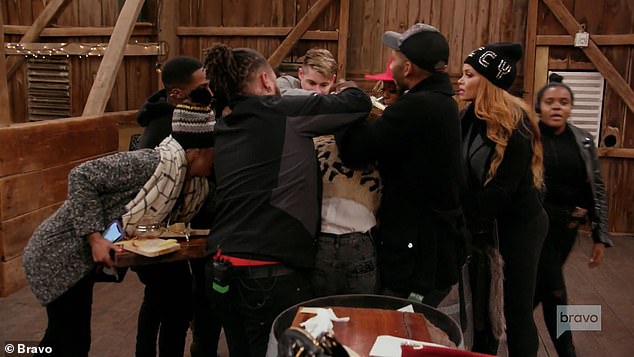 There are too many moral, ethical and legal indiscretions to possibly enumerate in the Housewives franchise, including stealing, violence, racism, crashing an official White House dinner uninvited and nearly every moral failing one could possibly imagine. (Above) A fight breaks out during Real Housewives of Potomac in September 2020.

I would have preferred this to be a teachable moment rather than a Salem Witch Trial for Jennie and her family.

I had wished she had been given a chance to truly explain herself in a sit-down interview with Andy or a news broadcaster at NBC.

The uncomfortable truth is that millions and millions of Americans support our law enforcement and looked on in horror as American cities were burned to the ground in the name of a protest movement.

Are they unworthy of consuming or appearing on Bravo television?

When we start throwing moral judgments around and canceling people who were hired because they are imperfect and problematic, where does that leave these shows?

The house of reality television was not built on individuals anyone would hold up for any kind of moral or ethical inspiration, they were hired because they are problematic. We gain nothing as a society by simply canceling people.

I can only assume Jennie was in survival mode this week trying to navigate the media tornado she was in. I wish we could give her the same grace as Jen Shah who will at least have her day in court

But alas, apparently the greatest sin you can commit on reality television isn’t breaking federal laws, physically assaulting someone, lying, cheating or stealing – it’s being a vocal Republican.

It’s a tricky, slippery slope for Bravo TV and NBC Universal to start firing their employees for problematic political beliefs.

Just as the worlds of sports and comic book movies have been invaded by politics so too could reality television easily suffer the same fate and become less an escape than a reminder that today, everything must be political.