Saturday, January 29th 2022, 9:17 pm – While the worst is over, many communities still have to deal with residual snow, rain, and wind before the big cleanup begins on Sunday.

Atlantic Canada’s third major winter storm in a month is not quite done yet. The latest bomb cyclone to hit the region brought howling winds, heavy snow, and a sloppy wintry mix along its path from North Carolina to Newfoundland. While the worst is over, the storm is not through with us. We’ve still got to deal with the storm and its fallout into the day on Sunday. More on what to expect as we close out the weekend and begin the cleanup, below.

SATURDAY NIGHT INTO SUNDAY: THE WORST IS OVER, BUT THE STORM ISN’T DONE YET

This is a dynamic system that’s affected each province differently. New Brunswick saw mostly snow, with storm totals of 40-50 cm likely in some areas. Prince Edward Island saw heavy snow slowly change over to ice pellets and freezing rain. Nova Scotia saw the whole spectrum of precipitation. Newfoundland is in line for heavy rain in the east and heavy snows in the west. 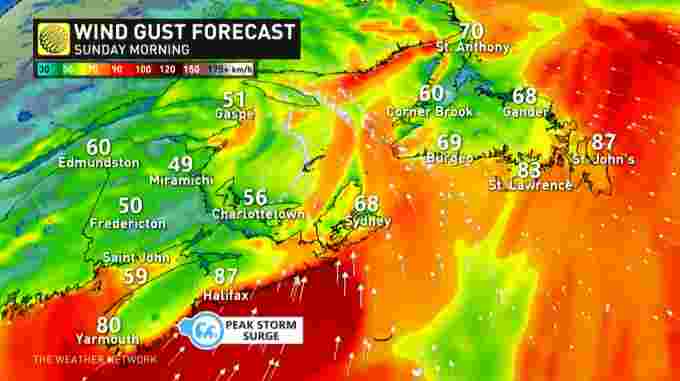 While the worst unfolded on Saturday afternoon, we’re still going to have to deal with this storm for a while longer. The bulk of the storm will approach Newfoundland on Saturday night, bringing strong, persistent winds with it.

Gusts of 80-100 km / h remain possible through Sunday morning. The strong winds could lead to a risk of power outages — especially where ice accretions from freezing rain loom on trees and power lines — as well as a risk of coastal flooding.

A storm surge pushed ashore by the persistent winds could lead to coastal inundation, especially along Nova Scotia’s southern shores.

Blowing and drifting snow will remain an issue even after precipitation ends. Stay indoors and avoid travel during periods of low visibility. It’s very easy to become disoriented in blowing snow, even if you’re close to home on your own property. 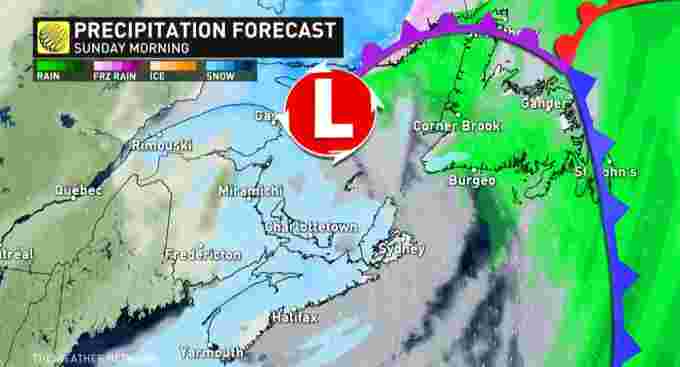 Heavy precipitation will slowly wind down over the Maritimes into Saturday night, but there’s more on the way. Light snow wrapping around the western side of the storm could add to snowfall totals across the Maritimes. Colder air aloft should make this an all-snow finale for the whole region, even bringing snow to areas that saw mostly ice or rain on Saturday. 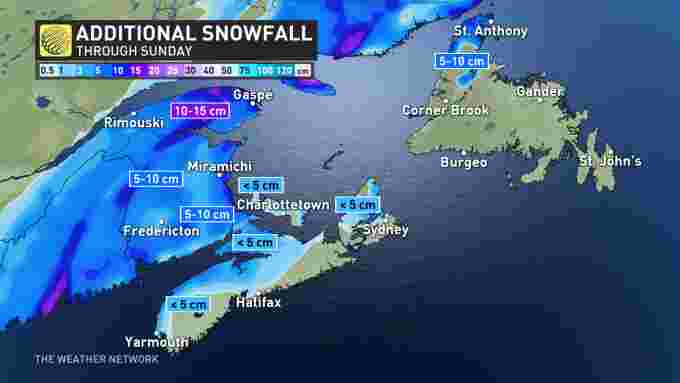 Another 5-10 cm of snow is possible through Sunday across New Brunswick and the Fundy shores, with locally higher totals possible. Elsewhere, additional snowfall totals should amount to less than 5 cm.

WATCH: WHAT, EXACTLY, IS A ‘WEATHER BOMB’?