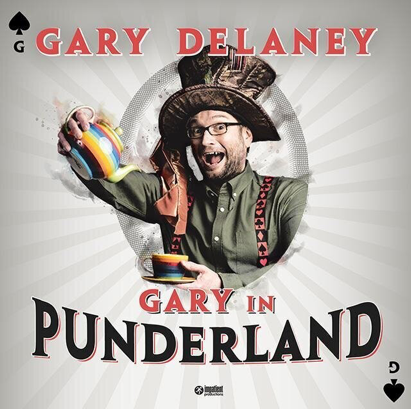 After performing no fewer than 160 shows on his last circuit of the country, Gary Delaney might be expected to take a bit of a breather now.

But he has spent the lockdown period burrowing through the looking-glass and emerging with a brand show. Welcome to ‘Gary In Punderland’ which will come to The Lowry, Salford Quays, on the 26th February.

One of the most sought-after, prolific and successful gagsmiths in the country, Live At The Apollo star and longstanding Mock the Week special guest, Gary unleashes a brand new show with hit after hit of the kind of one-liners only a master could craft. If you’ve hunting for snark, Gary’s got it covered. (NOTE: people not actively hunting for snark will also be entertained.) You can expect, as ever, a killer-gag-rate rivalled by nobody out there, and a merciless evening of wall-to-wall, no-filler joke artistry .

Gary Delaney’s credentials as a uniquely gifted one-liner craftsman were even further underlined this year, when he published his first book – ‘Pundamentalist’. (To be more specific about it, Headline published it for him; Gary did not have to print out all the copies and staple them together himself.) More than two hundred five-star reviews on Amazon confirm what the UK’s comedy fans already know : the man is a joke phenomenon. Do not miss this chance to see him do what he does best, with a massive new arsenal of material. You are cordially invited to Punderland.

For more information or to book tickets click here.