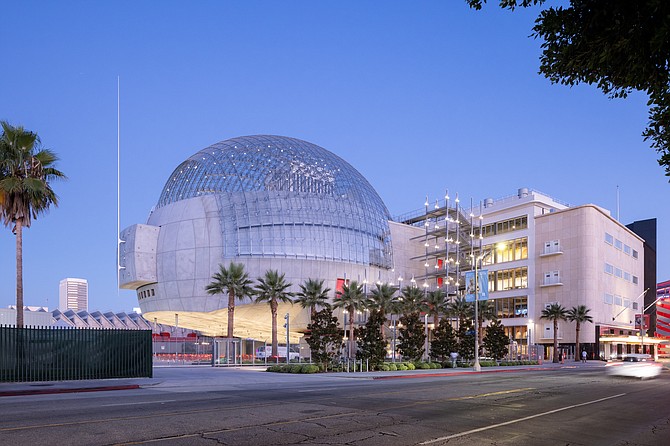 Like Gloria Swanson in the late 1950s Sunset Blvd., LA’s latest visitor attraction, the Academy Museum of Motion Pictures, is finally ready for the close-up.

Years along the way, the Academy Museum premiered on 30 September. The Cinematic Sanctuary “is a new home for the art of filmmaking in Los Angeles, the world capital of film production,” said Bill Kramer, president of the Academy of Motion Picture Arts and Sciences.

At the same press event in September that Kramer talked about, architect Renzo Piano ingeniously compared the building’s futuristic spherical design to “a soap bubble. Don’t call it the ‘Death Star’. Call it a zeppelin or a spaceship.” Located on the “Miracle Mile” in Mid-City LA, the 250,000-square-foot space adjoins what had been the May Company (now the Saban Building), famous for its gold-plated cylindrical section resembling a lipstick tube. 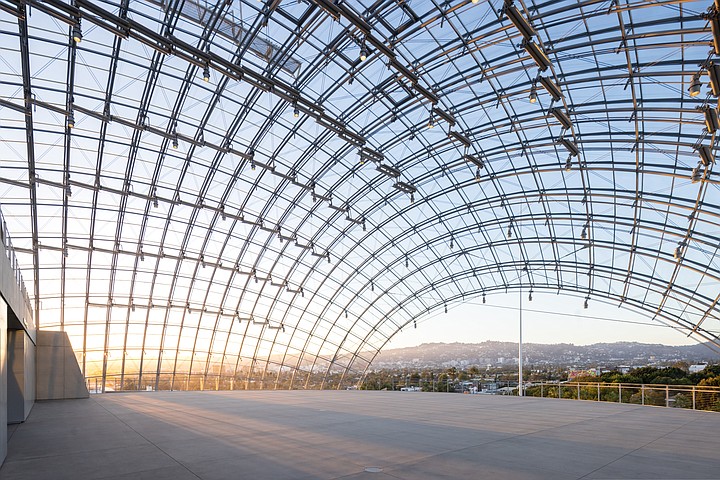 On the roof terrace of the Academy Museum, overlooking the valley and the Hollywood Hills.

What to expect at the Academy Museum

Inside, I saw some of the iconic artifacts of the big screen.

The screens include Jaws shark, hanging over an escalator. Borger Kane‘s Rosebud sled is encased behind glass, as are Dorothy’s ruby ​​slippers in a gallery dedicated to The Wizard of Oz.

“The Backdrop: An Invisible Art Exhibition,” which is visible on levels 2 and 3 of the museum’s Hurd Gallery, features a colossal 34-foot-high painted backdrop of Mt. Rushmore, as stage designers created for the climate scenes in Alfred Hitchcock’s 1959 thriller North by Northwest.

The Path to Cinema Gallery displays devices, optical toys, and objects such as magic lanterns, Indonesian shadow puppets, peep-shows, and zoetropes used to project and move images — the invention of film itself — around 1895. Next it dies. third level is the kitschy Oscar experience, where museum-goers are recorded “winning” an Oscar.

The Academy Museum boasts two showrooms, the 1,000-seat David Geffen Theater (where the press conference was held) and the 288-seat Ted Mann Theater. There are some ambitious film series in line, which started with a live orchestra that accompanied Judy Garland in a screening of – what else? – The Wizard of Oz. To honor Halloween, 13 gruesome films nominated for or winning Oscars were presented, including the 1935s Frankenstein’s bride, Hitchcocks 1960 Psycho, 1973s The exorcist and the 2017s Go out.

At a star-studded fundraising gala on September 25, the first Vantage Award was given to Ethiopian director Haile Gerima for (according to a press release) “his work … help[ing] to contextualize and challenge dominant narratives surrounding cinema. “A retrospective of Gerima’s oeuvre, including his 1993 feature on the transatlantic slave trade, Sankofa, had hosted the Geffen Theater. Following this screening, the African filmmaker participated in a panel discussion moderated by Ava DuVernay, whose own 2014 civil rights epic Selma was shown on October 20 at Geffen as part of the series Gerima’s Comrades.

The Academy Museum also offers exhibits that address the difficult issues of Hollywood’s celluloid stereotypes, ethnic misrepresentations, and cultural wrongdoing. It seemed to me to be a sincere response to attacks on the Academy in recent years for alleged “#OscarsSoWhite” exclusionary policies – ranging from who wins (and votes for) the annual Oscars to the industry association’s overwhelming 60-year-old white male membership.

One gallery I liked was dedicated to the pioneering African-American filmmaker of the quiet era, Oscar Micheaux, where the racist history behind minstrelsy is explained.

Real women have curves, a 2002 feature on contemporary Latin Americans in East LA, based on the plays of Josefina Lopez, starring Lupe Ontiveros, George Lopez and America Ferrera, is also featured.

An excerpt from the documentary Reel Injun is shown on a screen inside a showcase that focuses on Hollywood’s mistreatment of Native Americans, as well as the emergence of Native American cinema, from North American tribes to Australian Aborigines and New Zealand Maori. November 15 Zacharias Kunuk’s Inuit feature from 2001 The fast runner was shown at Mann, where the Polynesian theme Moana was scheduled for November 13 and 27.

Most of the fourth floor is devoted to a large exhibition about the Japanese animator Hayao Miyazaki, with huge reproductions of his artworks and big screens showing vignettes from his enchanting classics, such as. 1997s Princess Mononoke.

The envelope, thank you: I predict that “Best Film Museum” Oscar will go to the Academy Museum!