Researchers have discovered abnormalities in the lungs of long COVID patients who suffered from breathlessness a long time after they were infected, which could not be detected with routine tests, according to media reports.

The pilot study used xenon – an odorless, colorless, tasteless and chemically non-reactive gas – to investigate possible lung damage in patients who recovered from the disease but continued to experience shortness of breath.

Initial results suggested significantly impaired gas transfer from the lungs to the bloodstream even though other tests – including CT scans – came back as normal, raising the possibility that COVID causes microscopic damage to the respiratory system.

Breathlessness is a symptom in the majority of long COVID patients, but it has been unclear whether this is linked to other factors such as changes in breathing patterns, tiredness, or something more fundamental.

The study’s chief investigator, Fergus Gleeson, professor of radiology at the University of Oxford and consultant radiologist at Oxford University Hospitals NHS Foundation Trust, said: “We knew from our post-hospital COVID study that xenon could detect abnormalities when the CT scan and other lung function tests are normal.

“What we’ve found now is that, even though their CT scans are normal, the xenon MRI scans have detected similar abnormalities in patients with long COVID. These patients have never been in hospital and did not have an acute severe illness when they had their COVID-19 infection. Some of them have been experiencing their symptoms for a year after contracting COVID-19, ”he added. 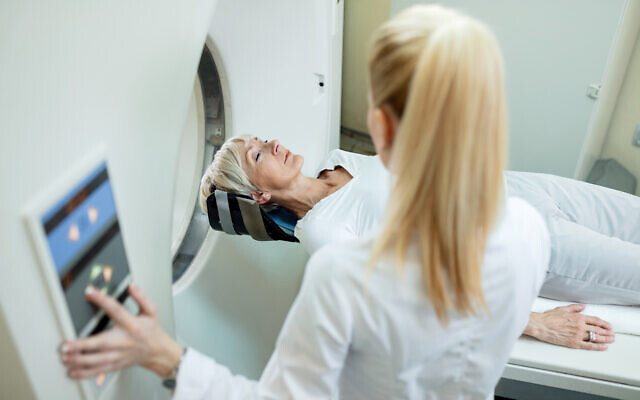 “Once we understand the mechanisms driving these symptoms, we will be better placed to develop more effective treatments.”

In the study, the patients were required to lie in an MRI scanner and breathe in one liter of the gas, which was tweaked so that it could be seen by the machine.

Because xenon, which is safe to inhale, behaves in a very similar way to oxygen, radiologists can observe how it moves from the lungs into the bloodstream.

The scans take just a few minutes and, as they do not require radiation exposure, can be repeated over time to see changes to the lungs.

Dr. Emily Fraser, a respiratory consultant who leads the Oxford Post-COVID Assessment Clinic, said: “These are interesting results and may indicate that the changes observed within the lungs of some patients with long COVID contribute to breathlessness.

“However, these are early findings and further work to understand the clinical significance is key,” she cautioned.

Asked what people suffering from the symptom can take from the findings, she added: “I think the message should be that we are actively researching what is driving long COVID.”

But Dr. Fraser also said people should not give up on their exercises and rehab, as these are helpful.

“Xenon follows the pathway of oxygen when it is taken up by the lungs and can tell us where the abnormality lies between the airways, gas exchange membranes and capillaries in the lungs,” she said.

While the full study will recruit about 400 participants, the initial pilot had 36 participants making up three groups: patients diagnosed with long COVID who have normal CT scans, people who had been hospitalized with COVID more than three months previously and were not experiencing long COVID , and a healthy control group.

The findings, which have not been peer-reviewed, have been posted on the bioRxiv pre-print server.

During a global pandemic, one tiny country is producing research that’s helping to guide health policy across the world. How effective are COVID-19 vaccines? After the initial two shots, does a third dose help? What about a fourth?

When The Times of Israel began covering COVID-19, we had no idea that our small beat would become such a central part of the global story. Who could have known that Israel would be first at nearly every juncture of the vaccination story – and generate the research that’s so urgently needed today?

Our team has covered this story with the rigor and accuracy that characterizes Times of Israel reporting across topics. If it’s important to you that this kind of media organization exists and thrives, I urge you to support our work. Will you join The Times of Israel Community today?

You’re serious. We appreciate that!

We’re really pleased that you’ve read X Times of Israel articles in the past month.

That’s why we come to work every day – to provide discerning readers like you with must-read coverage of Israel and the Jewish world.

So now we have a request. Unlike other news outlets, we have not put up a paywall. But as the journalism we do is costly, we invite readers for whom The Times of Israel has become important to help support our work by joining The Times of Israel Community.

For as little as $ 6 a month you can help support our quality journalism while enjoying The Times of Israel AD-FREE, as well as accessing exclusive content available only to Times of Israel Community members.